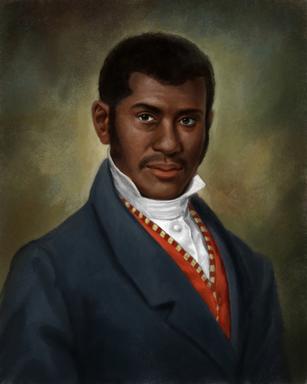 Pierre was born in Haiti and brought to New York City as a slave, where he died a free man.

Bérard, the plantation owner and Pierre’s master, allowed Pierre’s grandmother to teach her grandson how to read and write. In his early 20s, Pierre, his younger sister, his aunt, and two other house slaves accompanied their master’s son to New York City because of political unrest at home. Apprenticed to a local hairdresser, Pierre learned the trade quickly and eventually worked in the homes of rich women in New York City.

When his master died, Pierre supported his master’s widow and the other slaves himself, and was freed shortly before the widow’s death in 1807. Four years later, he married Marie Rose Juliette, whose freedom he had purchased. They later adopted Euphémie, his orphaned niece. Both preceded him in death.

Within the Catholic community, even during his lifetime, Toussaint enjoyed the reputation of an exceptionally devout and charitable person. Every day he attended the 6:00 a.m. Mass in St. Peter’s Church, where he was a pewholder for many years. He also raised funds to build the original St. Patrick’s Cathedral and St. Vincent de Paul Church.​

Pierre donated to various charities, generously assisting blacks and whites in need. He and his wife opened their home to orphans and educated them. The couple also nursed abandoned people who were suffering from yellow fever. Perhaps his favorite charity was St. Patrick’s Orphan Asylum, an institution that he often visited. Urged to retire and enjoy the wealth he had accumulated, Pierre responded, “I have enough for myself, but if I stop working I have not enough for others.”

In recognition of Pierre Toussaint’s virtuous life, the late Cardinal Terence Cooke introduced Pierre’s cause for canonization at the Vatican in 1968. In December 1989, the late Cardinal O’Connor had the remains of Pierre Toussaint transferred from Lower Manhattan to St. Patrick’s Cathedral in midtown Manhattan where he is buried as the only lay person, alongside the former Cardinal-Archbishops of New York City. On December 17, 1997, Pope John Paul II declared Pierre Toussaint, Venerable, thus placing him firmly on the road to becoming North America’s first black saint.

She was born Elizabeth Lange in around 1794 in Santiago de Cuba, where she lived in a primarily French speaking community. She received an excellent education and in the early 1800s Elizabeth left Cuba and settled in the United States. Elizabeth came to Baltimore as a courageous, loving, and deeply spiritual woman. There was no free public education for African American children in Maryland until 1868, so she responded to that need by opening a school in her home in the Fells Point area of the city for the children.

Providence intervened through the person of Reverend James Hector Joubert, SS, who was encouraged by James Whitfield, Archbishop of Baltimore, and presented Elizabeth Lange with the idea to found a religious congregation for the education of African American girls.  Father Joubert would provide direction, solicit financial assistance, and encourage other “women of colour” to become members of this, the first congregation of African American women religious in the history of the Catholic Church. Elizabeth joyfully accepted Father Joubert’s idea. On July 2, 1829 Elizabeth and three other women professed their vows and became the Oblate Sisters of Providence. Elizabeth, foundress and first superior general of the Oblate Sisters of Providence, took the religious name of Mary.

William Cardinal Keeler, Archbishop of Baltimore, opened a formal investigation into Mother Lange’s life  and works of charity in 1991. The Vatican’s Congregation for the Doctrine for the Causes of Saints approved the cause of her sainthood in 2004, and Archbishop William Lori of Baltimore celebrated a canonical celebration at the transfer and blessing of Mother Lange’s remains. The faithful venerated the relics before they were sealed in a reliquary and sarcophagus in the chapel’s oratory. The sarcophagus cannot be reopened without Vatican permission. Also present at the celebration were Bishop John H. Ricard, bishop emeritus of Pensacola-Tallahassee, and Xaverian Brother Reginald Cruz, vice postulator for Mother Lange’s cause for sainthood.

If the Congregation for the Causes of the Saints approves the positio being written by Brother Cruz, Mother Lange, currently considered a “Servant of God,” would be given the title “Venerable.” A confirmed miracle attributed to her intercession would then be necessary for her beatification, and a second miracle would be necessary for her canonization. 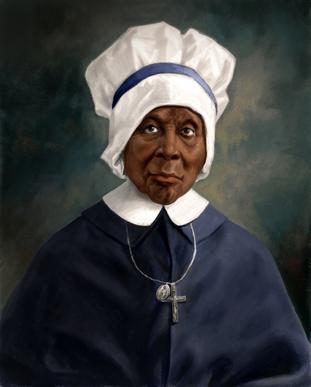 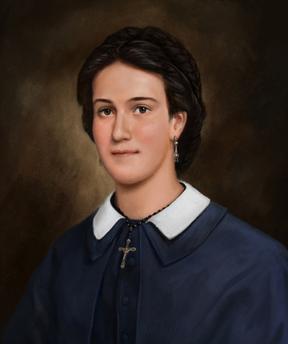 Henriette Delille, was born in 1812 in New Orleans, Louisiana, as a free woman of color. At 24 years of age, Henriette experienced a religious conversion, and proclaimed: “I believe in God. I hope in God. I love. I want to live and die for God.”

Henriette eventually founded the Society of the Holy Family, responding to the need for treatment of the enslaved, elderly and sick, and care and education for the poor.

Henriette received tribute for her life’s work in these words from her obituary, “ . . . (Henriette) devoted herself untiringly for many years, without reserve, to the religious instruction of the people of New Orleans, principally of slaves. . . .” The last line of her obituary reads, “. . . for the love of Jesus Christ she had become the humble and devout servant of the slaves.”  Archbishop Philip M. Hannan began the canonization process for Henriette DeLille in 1988. A special commission in Rome gave approval in 1988 after a review process. In 2004 a biography of her life, written by Fr. Cyprian Davis, OSB, was published.

The Canonization process is comprised of four phases: Servant of God, Venerable, Blessed and Saint.  As of this time, an alleged miracle attributed to Henriette is being tried in a Catholic Tribunal, and the decree of judicial validity was issued in the investigation of her life, virtues, and reputation of sanctity. Henriette was bestowed with the title of Venerable by Pope Benedict XVI in 2010.

Augustus was born a slave on April 1, 1854 in Missouri. His parents, Martha Jane and Peter Paul, were Catholic and Augustus was also baptized Catholic.  Knowing their family could be separated through the open market of slave trading and given the outbreak of the Civil War, his parents hoped to gain freedom for their family. Peter Paul escaped to the North to serve in the Union Army.  Although he planned to return for his family, he was one of 180,000 blacks eventually killed in the war. When he did not return, his widow and three of her children made a harrowing escape to freedom, eventually crossing the Mississippi River to the free state of Illinois and settling in the small town of Quincy.

When her children attempted to attend the all-white Catholic schools, parents of the other children protested, so they were asked to leave. Little Gus began working in the local factories to help support the family.  When a priest realized his Catholic faith was being neglected, he called upon the School Sisters of Notre Dame for assistance.  They realized he was far behind in all his studies and began tutoring him privately.

At a young age Augustus, began displaying an interest in the priesthood. His parish priests, Fathers McGuirr and Richardt, encouraged the young man in this aspiration.  They unsuccessfully tried to enroll him in several diocesan seminaries.  They then decided that if the seminaries would not have him, they would begin Augustus’ education in theology themselves. In 1878, the Franciscan College in Quincy accepted him for general college undergraduate studies.  Then, two years later, he was accepted and enrolled at the College of the Propaganda Fide in Rome.  Upon completion of his courses there, Augustus Tolton was ordained on April 24, 1886.

Although Tolton was sure he would be assigned to Africa, the Church surprisingly sent him back to America.  His first assignment would be Saint Joseph’s Mission for black Catholics in his home town of Quincy.  For the two years he served there, he also gained enormous respect from many of the German and Irish Catholics in the area; but, one local priest objected to this and began making Tolton’s life miserable.

After his brief ministry in the Alton Diocese, Tolton successfully petitioned for a move to the Archdiocese of Chicago.  He was given an assignment to care for the black Catholics on the south side of Chicago, known by all as the Saint Augustine’s Society which would later become Saint Monica Catholic Church.  It also became the center from which he ministered to all the Black Catholics of Chicago.  Indeed, as the only known Black priest of his day, Tolton ministered well beyond Chicago.  He even addressed the First Catholic Colored Congress in Washington DC in 1889.  All of these duties took a toll on his health.  After collapsing from a heat stroke and other complications, Tolton died at Mercy Hospital in Chicago on July 9, 1897.  He was only 43 years old.  A funeral was held just a few days later on July 12th at St. Monica Church, 36th and Dearborn Street of Chicago.  A second funeral also occurred at St. Peter Church in Quincy on July 13, because Tolton requested to be buried in that small town he loved. 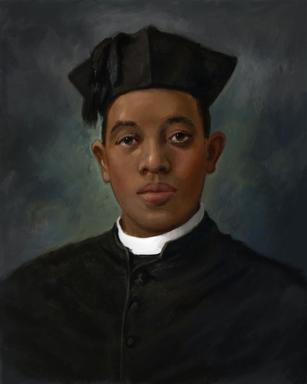 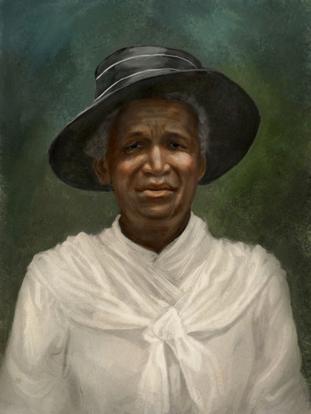 Denver’s Angel of Charity was born into slavery, at Hannibal, Missouri, between 1833 and 1848. As a young child, Julia’s right eye was destroyed by a cruel slavemaster’s whip.

Freed by the Emancipation Proclamation in 1863, Julia subsequently earned her keep by serving white families in Missouri, Colorado, Wyoming and New Mexico—though mostly in the Denver area. Whatever she could spare, Julia ​spent assisting poor families in her neighborhood. When her resources were inadequate, she begged for food, fuel and clothing for the needy. To avoid embarrassing the people she helped, Julia did most of her charitable work under cover of night through dark alleys.

Julia entered the Catholic Church at Sacred Heart Parish in Denver in 1880. The Jesuits who ran the parish considered her the most enthusiastic promoter of devotion to the Sacred Heart of Jesus they had ever seen. Every month she visited on foot every fire station in Denver and delivered literature of the Sacred Heart League to the firemen, Catholics and non-Catholics alike.

A daily communicant, Julia had a rich devotion to the Blessed Sacrament and the Blessed Virgin and continued her prayers while working and moving about. She joined the Secular Franciscan Order in 1901 and was active in it till her death in 1918.

To the present day many people have been asking that her cause be considered for canonization, a request which was finally granted in the Fall of 2016.  As part of the Cause for Canonization, Julia’s mortal remain were transferred to Denver’s Cathedral Basilica of the Immaculate Conception on
​June 7, 2017.

A self-proclaimed, “old folks child,” Thea Bowman, named at birth, Bertha Elizabeth Bowman, the daughter of middle-aged parents, Dr. Theon Bowman, a physician and Mary Esther Bowman, a teacher. She was born in 1937 and reared in Canton, Mississippi. As a child she converted to Catholicism by the influence of the Franciscan Sisters of Perpetual Adoration and the Missionary Servants of the Most Holy Trinity who were her teachers and nurtured her faith. Growing up, Thea listened and learned from the wit and wisdom of the elders. Ever precocious, she would ask questions and seek new insights on how her elders lived, thrived and survived. She learned from family members and those in the community coping mechanisms and survival skills. She was exposed to the richness of the African-American culture: the history, the stories, the music, the songs, the rituals, the prayers, the symbols, the foods, the customs and traditions. Moreover, she was cognizant that God was indeed the God of the poor and oppressed. Her community instructed her, “If you get, give—if you learn, teach.” She developed a deep and abiding love and faith in a God who would make “a way out of no way!” Read more… 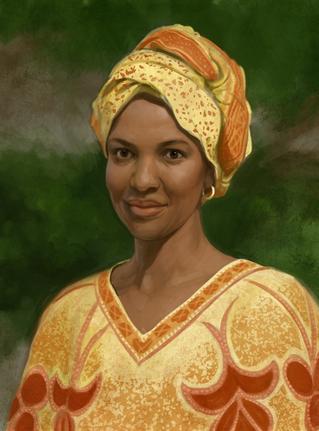